Japanese students, standing in front of a tie-dyed backdrop, donned colorful vests and hippie-style glasses to end their study tour with some American culture and good ol' “selfies,” May 20 at Clover Park Technical College.

The 60s — Peace, love and “flower power” — was the theme of the afternoon cultural exchange for the 38 students visiting the CPTC. The students traveled from Osaka Jikei College in Japan as part of a partnership between the two colleges’ Medical Laboratory and Medical Histology Technician programs.

“It’s important for students of the colleges to learn from each other — learning goes both ways,” said Yuko Chartraw, CPTC international education program specialist. “Learning about new cultures and new ideas is important because students could potentially end up in the global workforce.”

Though an amusing environment, it wasn’t all fun and games. Students started their three-day tour at the CPTC Medical Histology Technician lab with hands-on learning side-by-side American students.

“We worked with them on cutting frozen tissues and microtome — we all were able to teach each other different techniques and skills in the lab,” said Kellie Martin, a CPTC Histology student. “I also got to learn a lot about their culture and see that we like a lot of the same things — music, food and fun.”

The partnership between OJC and CPTC has been ongoing since 2005. Twice a year during the fall and spring semesters, OJC students are hosted by either the Histology or Medical Lab Technician Departments at CPTC.

“We live 5,000 miles apart, but can learn a lot from each other; through the American students I was able to learn a lot about American society and culture,” said OJC student Masako Kushio, with a translator. “I found that the basic lab techniques are the same, but there are also some big differences.”

Students also got a campus tour and luncheon where they ate with American students and practiced their English conversation skills.

“It’s hard to get on a personal level when you don’t speak the same language, but we were able to use the Google Translator app to talk at lunch,” said Ryan Scott, a CPTC Histology student. “Even though we’re from different countries, we’re still connected on a fundamental level.”

Throughout their trip, OJC and CPTC students could be seen laughing, having fun and taking photos together — often without saying a word.

“The Japanese students are a lot of fun,” Martin said. “They love to laugh at themselves and just have a great sense of humor.”

The student’s second day was spent touring labs in the Seattle-area; including CellNetix Pathology and Harborview Medical Center Pathology.

“I love the Seattle weather, I’m not even jet lagged,” Kushio said.

On the third day, students returned to CPTC where they exchanged lectures on several topics.

A University of Washington professor spoke on autopsy and demonstrated a live gallbladder dissection. Then OJC students gave a presentation on “Yokkaichi Asthma” (caused by air pollution in Japan) and CPTC students spoke on the Zika virus.

“Their presentation was excellent,” Haggerty said about the OJC students. “Every year is a new topic and there’s always something interesting to learn.”

After the lectures were said and done, students had some fun with the cultural exchange.

“I really love the cultural exchange, it takes the education out of it and allows the students to collaborate and have fun together,” Haggerty said.

And OJC students got a kick out of it — even if they may have not fully understood the cultural theme “flower power.”

“The theme was very interesting,” said OJC student Hayato Yokoyama, who had never been exposed to American culture from the 60s. “I didn’t know about ‘flower power’ before this and want to learn more.”

Student’s didn’t just enjoy the “selfies” booth, but also got to make key chains and tie-dye fabric. OJC students also taught CPTC staff Japanese calligraphy and origami, dressed them in Kimonos and taught them to use chopsticks.

“It’s fun teaching them to use chopsticks — not many Americans know how,” said OJC student Kanako Wagamitsu, with a translator. “When I went to eat lunch I didn’t see chopsticks, it was difficult to eat with a fork,” she laughed.

The students agreed it was a fun way to end their study tour.

“I really enjoyed Clover Park and was surprised how ethnically diverse the students were,” Kushiro said. “It was a hard and busy schedule the last three days, but I would love to come back to America for a vacation some day.”

Lucky for Kushiro, the students’ next stop before heading home to Osaka was Disney Land. 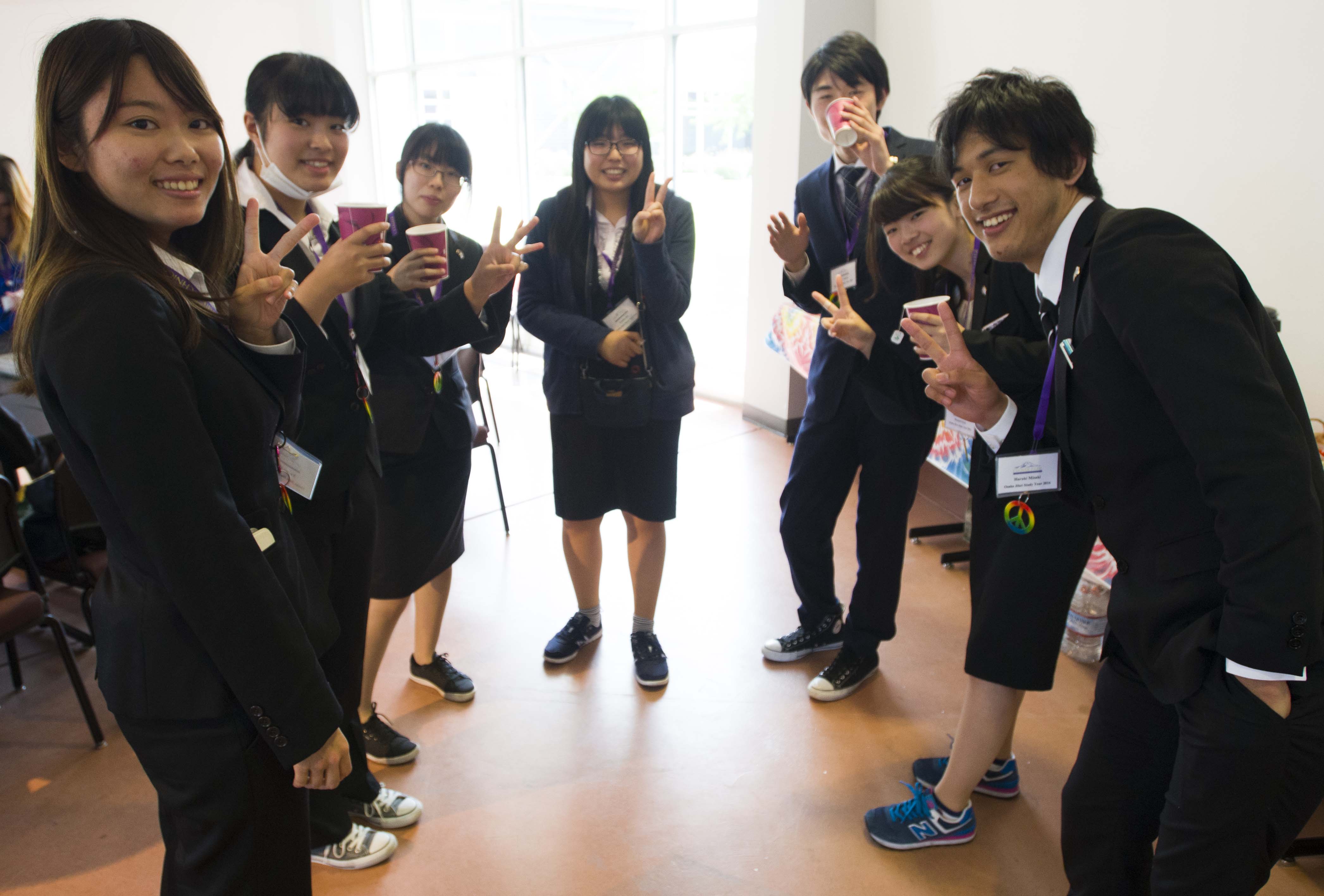 Clover Park Technical College and Osaka Jikei College students sit side-by-side during presentations on the last day of the OJC study tour, May 18-20 at CPTC. The study tour is part of an ongoing partnership between CPTC and OJC since 2005.