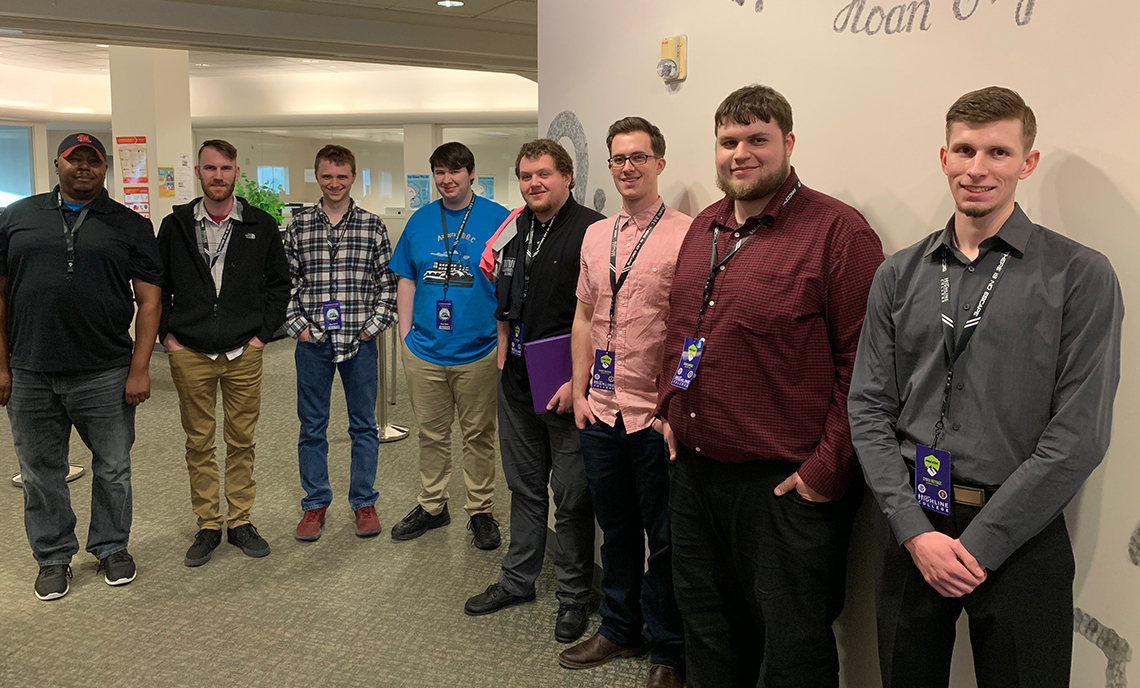 With the threat of cyber attacks always growing in our world, the need for prepared cyber security professionals is greater than ever. Last weekend, a group of eight Clover Park Technical College Computer Networking & Information Systems Security Students had the opportunity to put their skills and learning to the test in a simulated cyber attack at the Pacific Rim Collegiate Cyber Defense Competition (PRCCDC).

The three-day competition (March 22-24) essentially locked the group into a room on the campus of Highline Community College where they were given a business scenario and had to defend their organization from an array of attacks. CPTC was one of 14 colleges participating in the regional competition, which primarily included large four-year colleges and universities. The team finished 10th overall.

“Team preparedness was higher than ever this year,” CPTC NOSS (formerly known as CNISS) instructor Jay Lanphier said. “With a short amount of time to prepare – especially given this year’s weather conditions and setbacks last month – our team did an amazing job.”

A preliminary competition featuring 32 teams had been scheduled for early February to qualify teams for the PRCCDC, but the snow pushed it back several weeks and left a shorter window to prepare for the main event. However, the competitions of the past month only marked the culmination of a full year of planning.

Immediately following the competition each year – this was the fifth year CPTC participated – Lanphier shifts the focus to the next year’s squad. Students are chosen based on their skillsets, commitment, and ability to work well with the rest of the team.

“The selection process is really like a job interview,” Lanphier said. “Out of 150 students, only about 20 are interested because it takes a lot of effort beyond class time to make sure you really excel at what you do and can handle the extra workload and stress of the competition.”

While four-year programs can train students for several years to prepare for this competition, CPTC has less than two years with each student in the program. So Lanphier intentionally selects a couple teammates from earlier in the program who can grow and become team leaders for the next year. For the 2019 team, that was Marcus Hayes. Since the conclusion of last year’s competition, Hayes and Lanphier have worked together to select their team and prepare it for the challenge.

“It’s a really big deal to compete in this against all these other schools,” Hayes said. “It really is an honor. We want to build a working team, with people who have competencies in different areas to build upon each other’s skills.”

Each year, the competition gets a little bigger. The PRCCDC is one of 10 similar regional contests across the nation, and it includes key industry sponsors and invites new challenges each year. That helps inform Lanphier and the program about areas of emphasis.

“It really keeps us in check about what’s going on outside in the industry and areas we need to strengthen our program,” Lanphier said. “It’s a good experience for everyone involved.

This year’s team included Hayes, Garrett Hayes, Michael Keizer, Devin Wilkes, Ryan Barkhoff (who was named team MVP after the event), Jordan Dickson, and Spencer Adams. They spent all day Friday and Saturday in competition, while Sunday included a job fair with about 15 industry sponsors. Students have an opportunity to bring resumes and interview with the industry members at this event; in the five years CPTC has participated in the competition, several students have received job offers from these interviews. In fact, three program graduates participated in the competition this year as part of the “red” team that carries out the attacks.

“Cyber defense is huge,” Hayes said. “It’s one of those things that’s growing as businesses learn how important it is and start to take it really seriously. And this experience motivates us to learn more. We don’t just stop after the competition. This stimulates our curiosity and need to know, and just by going through it we’re giving ourselves a better education. It’s really fun.” 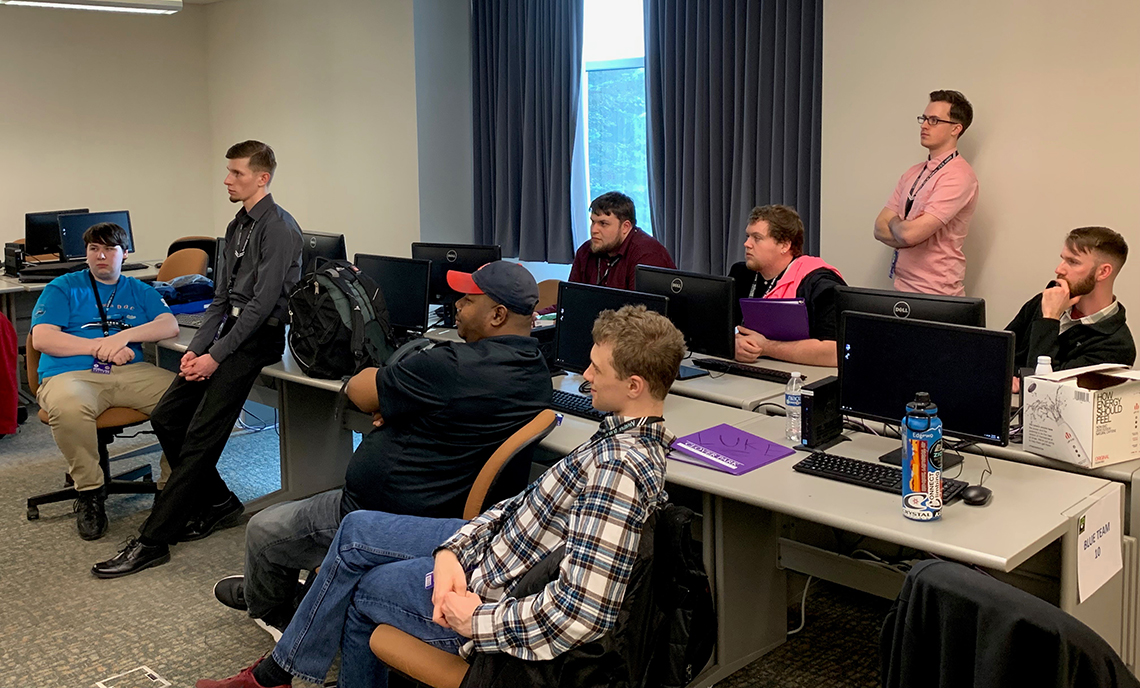 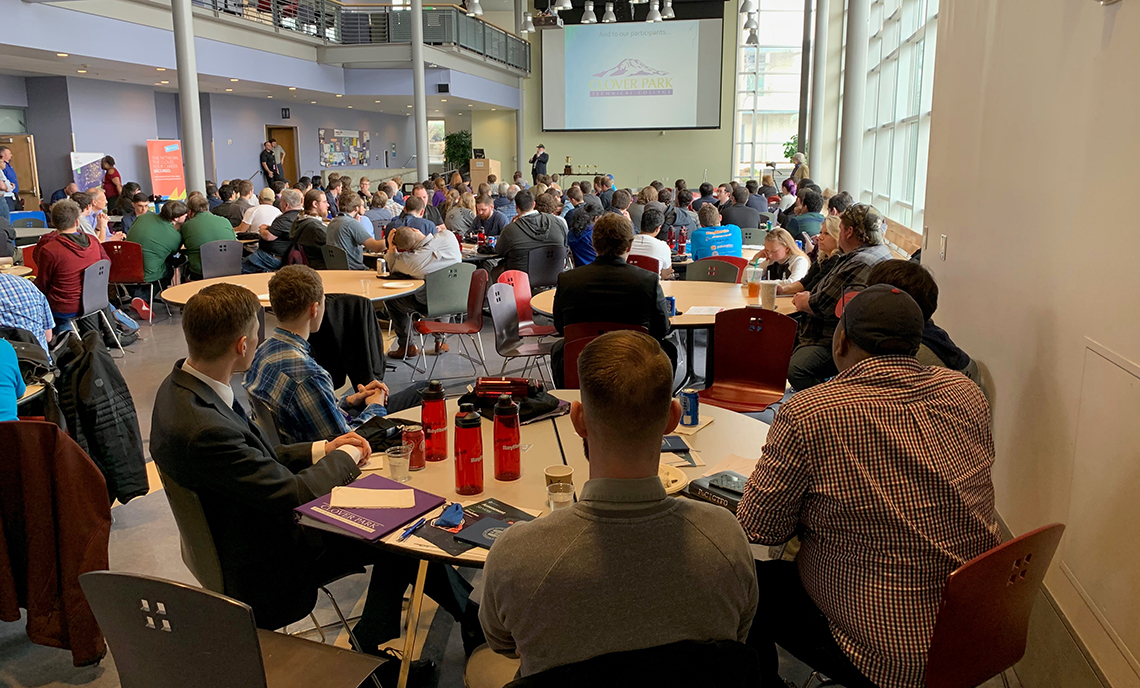 CPTC placed 10th overall out of 14 schools competing at the event.