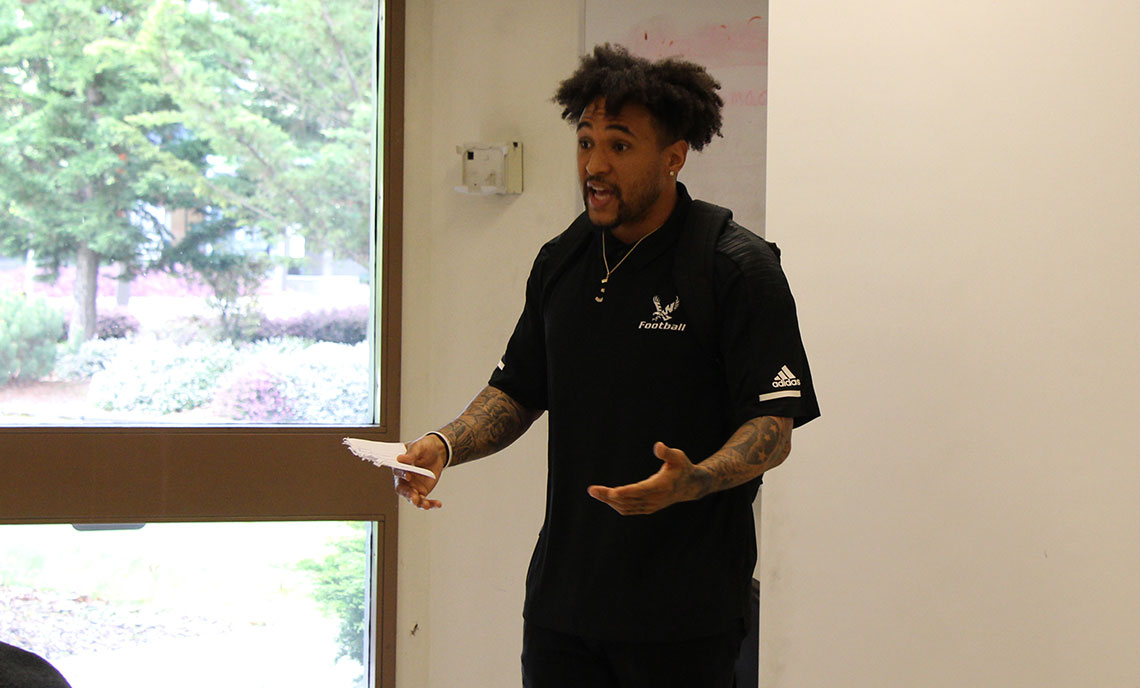 Vernon Adams, Jr., spoke to high school success students on Monday to share his experiences and lessons in perseverance.

Adams set program records while playing quarterback at both Eastern Washington University and University of Oregon and has spent the past three seasons playing in the Canadian Football League. He spoke for about 15 minutes and answered questions, focusing on three key points: dealing with adversity, expressing your greatness, and training your mind, body, and soul. He recounted his time growing up in southern California surrounded by gang violence and the dangers he faced when several of his friends started going down the wrong path. Instead of following that path, he persevered on the football field to earn a college scholarship and is still playing professionally despite his size.

“I’m the only 5-foot-10-inch, 180-lb quarterback out of the six professional leagues in the world,” Adams said. “I’m excited and thankful that I made it this far from where I came. My two best friends from childhood went to jail, and I could’ve been right there with them.”

Beyond overcoming adversity, Adams also encouraged the students to focus on what they want to achieve and share it.

Finally, he spoke about the importance of maintaining a healthy mindset. He shared some times in his own life when he struggled with mental health challenges and reminded the students that everyone faces those challenges.

“It’s not a bad thing to get help from somebody if you’re going through some tough things,” he said. “You’re not the only person going through it, and there are people who can help you.”

The high school success class at NWC&THS includes first-quarter students who came to the school credit-deficient and with a low grade point average from their previous high schools. The goal of the class is to give the students the tools they need to succeed.

“I was really impressed with his leadership and positive attitude when he was playing at University of Oregon,” NWC&THS principal/director Loren Davis said. “Some of the things he did and said even when he was hurt and injured to try to keep his team focused and motivated was quite a statement to his character and nature. When we found out he was in the area now and he offered to come speak to our students, I thought it was a huge honor and opportunity for us.”