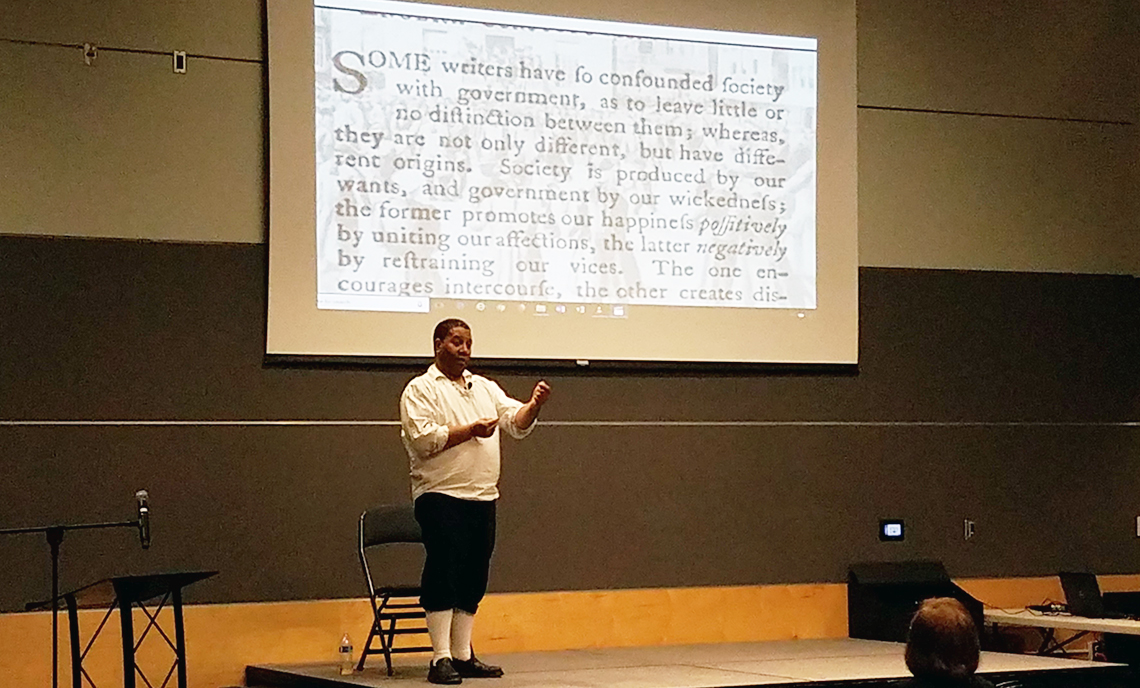 Clover Park Technical College students, staff and faculty members had a unique opportunity to hear the story of the United States Revolution through the eyes of a young man last week during a pair of performances of “Our Revolution” by Living Voices.

A total of around 50 attendees, with the majority of those students, watched the 25-minute performance and had a chance to ask questions afterward. While typically the story of the US Revolution focuses on the white soldiers and Founding Fathers, “Our Revolution” shares the experience of a fictionalized African American soldier based on composite real experiences from the time. Multicultural Programming hosted the event Feb. 20 in honor of Black History Month.

“We chose this piece both because it was one we had not yet seen here at CPTC, but also because of our large Veteran population,” Multicultural Programming committee member Sheli Sledge said. “I thought it would be an intriguing topic to share: following a soldier’s story who was not only fighting for his own freedom against slavery and oppression but also for the American Ideals of equality and freedom. I think we don’t often recall or remember that there were soldiers of color at that time, as our history books rarely mention them, except as a footnote.”

Robert Williams performed the multimedia show, which takes one actor on stage and includes his interactions with sounds, video and images projected on a screen. Williams took on the persona of Peter Freeman, a young man whose family is caught up in the Revolutionary War and faces fighting, slavery, capture, sickness and more. While the character of Peter Freeman is fictional, Williams explained following the performance that everything in the story was based on historical fact and events that happened to people at that time.

Living Voices is a performance organization based in Seattle that performs 12 different programs sharing fictionalized first-hand accounts of historical events from the past 250 years. According to its website, “Living Voices combines dynamic solo performances with archival film and sound, turning history into a moving and personal journey.”

“I have seen many versions of their programming in the past, so I knew they do good, in-depth work and felt confident bringing them here,” Sledge said. “We plan on bringing them back for a different program in the future.”

For those in attendance at “Our Revolution” last week, that moving and personal journey related to the present time and some of the conflict taking place in our country and world today. Williams answered questions and led a brief discussion about the value of learning from our past and telling our stories. He concluded the event by encouraging attendees to talk to the oldest people they know to hear the stories they have to share, and then to also talk to the youngest people they know to share their own stories and experiences.

CPTC students, staff and faculty who want to continue the conversation, the CPTC Diversity Committee is hosting a Spoken Word workshop on March 14 at 11:30 a.m. in Building 23, Room 209.