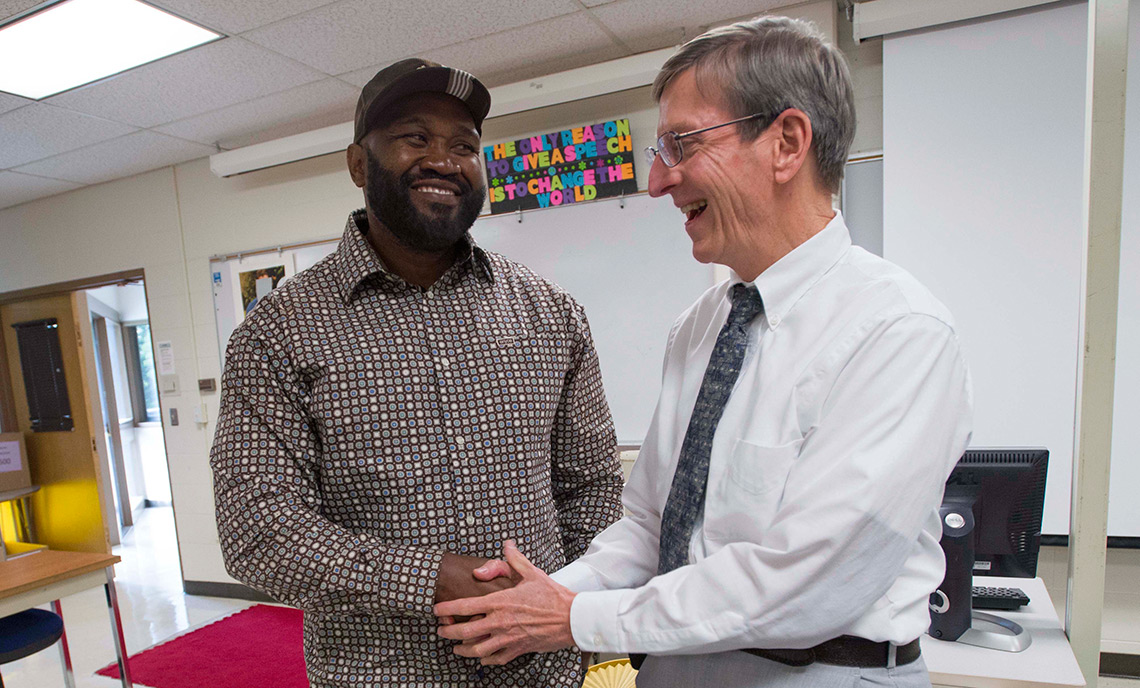 Michael Floyd, a Clover Technical College student and owner of the Lakewood barbershop “A Cut Above,” shakes Dr. Phil Venditti’s hand after his second-to-last public speaking class on June 9. Venditti met Floyd while getting his hair cut and convinced the barber to fulfill his desire to attend a public speaking course.

A Cut Above: CPTC Instructor Helps Barber Find His Voice

Fate was working in Michael Floyd’s favor when Dr. Phil Venditti, a public speaking instructor at Clover Park Technical College, walked into his barbershop for a haircut.

Floyd has owned his barbershop, “A Cut Above,” in Lakewood for 23 years and is also in training to become a longshoreman, but something was missing in his life. His love of ministry at his local church is his real passion, but public speaking had always been a challenge for him.

“I know I’m called to ministry, and that’s a tool I need to get rid of my nervousness speaking to people,” Floyd said. “So it worked out perfectly when I met Dr. Venditti. He said it’s serendipity; I say it’s nothing but the Lord.”

Either way, their meeting seemed predestined.

In fact, Floyd had been looking at taking a public speaking class for more than two-and-a-half years.

“I was so nervous about going back to school, and he came in and was very comforting,” Floyd said. “He helped me take the first step forward, so I knew I was destined to go to that class.”

That same day, Venditti came back with enrollment paperwork and a map of the Lakewood campus.

“He even helped me figure out a payment plan,” Floyd said. “They were so nice in admissions and helped paved the pathway for me.”

Although learning public speaking was a great desire for Floyd, it wasn’t easy for him to get started — he didn’t show up to the first two classes.

“I got discouraged, but then I got a call from Dr. Venditti asking where I was,” Floyd said. “He signed a waiver for me to get in, and I haven’t missed a class since.”

Floyd added that another student called him and told him about the class.

“They told me there’s a lot of older people, and people of all ages,” Floyd said. “Everyone in the class is very positive and encouraging. We all do speeches together and are included.”

Venditti added that Floyd now goes above and beyond as a student.

“He comes to every class early; he’s made more progress than 98 percent of the other students; he’s really serious about learning,” Venditti said.

Floyd finished the class earlier this month, and he said he enjoyed it immensely and felt much more comfortable in front of a crowd.

“He’s a great instructor — if you have the desire, he has all the patience in the world,” Floyd said about Venditti.

Some might have given up when Floyd didn’t show up the first week, but not Venditti.

“Every once in a while a student comes along that brings out the best in an instructor and reminds them of the purpose of a better education — for me every student is that student,” Venditti said.

Floyd said he didn’t want to stop at one class.

“I would love to get my associate degree, but am not sure in what yet,” Floyd said. “This is one of the best decisions I’ve made in my adult life, and I would encourage people at any age to go back to school if they want to.”

He said the fears that had held him back before were no longer on his mind and that others shouldn’t let their fears stop them either. 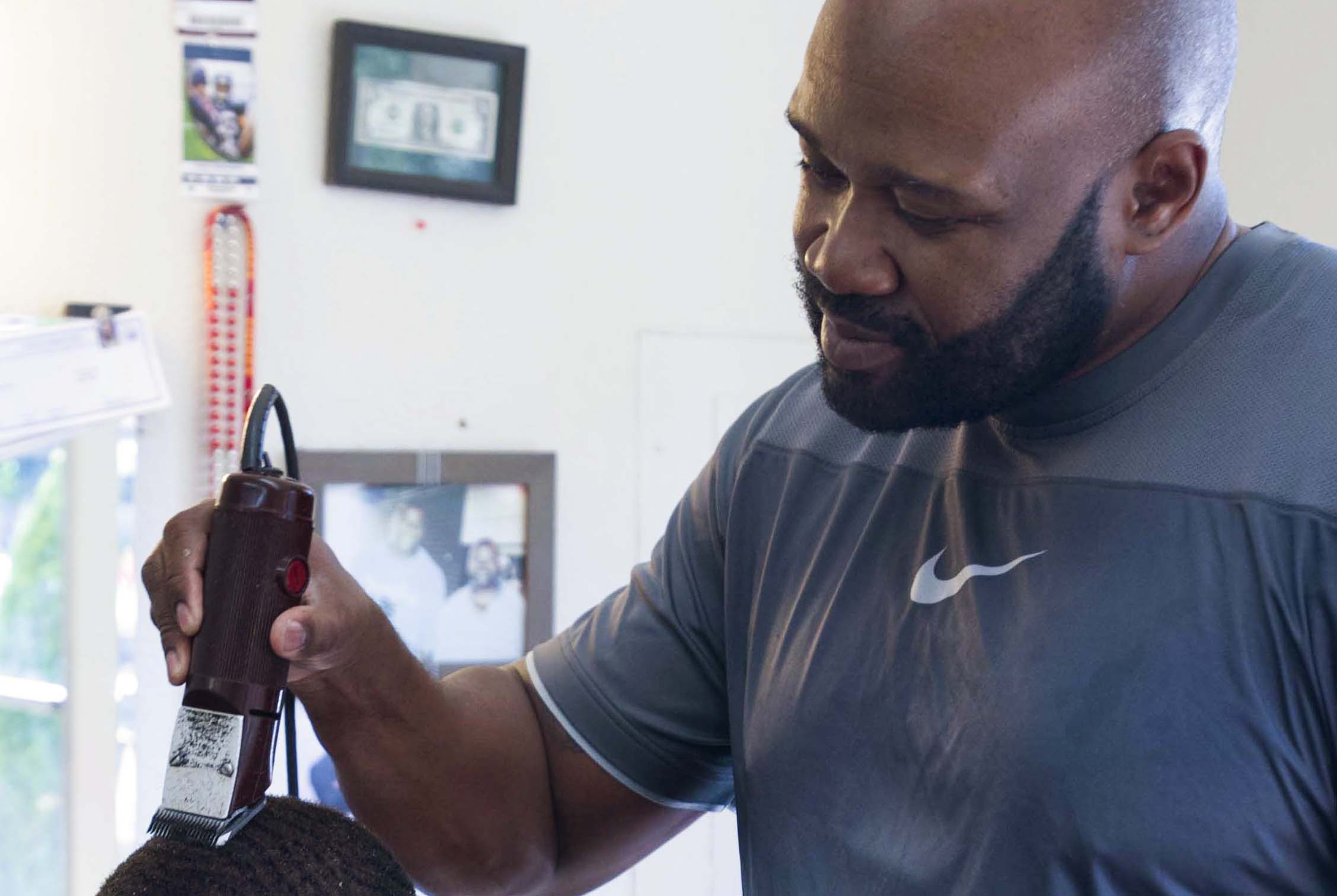 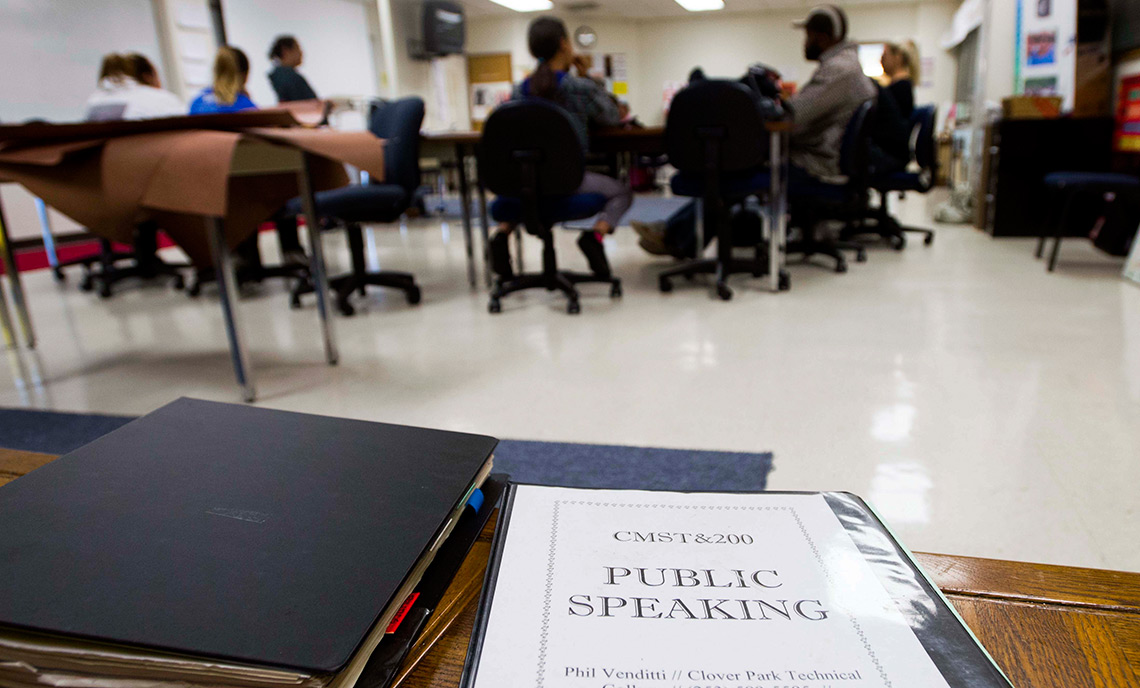 Students listen to impromptu speeches during Dr. Phil Venditti’s public speaking class at Clover Park Technical College on June 9. “Every once in a while a student comes along that brings out the best in an instructor and reminds them of the purpose of a better education — for me every student is that student,” Venditti said.