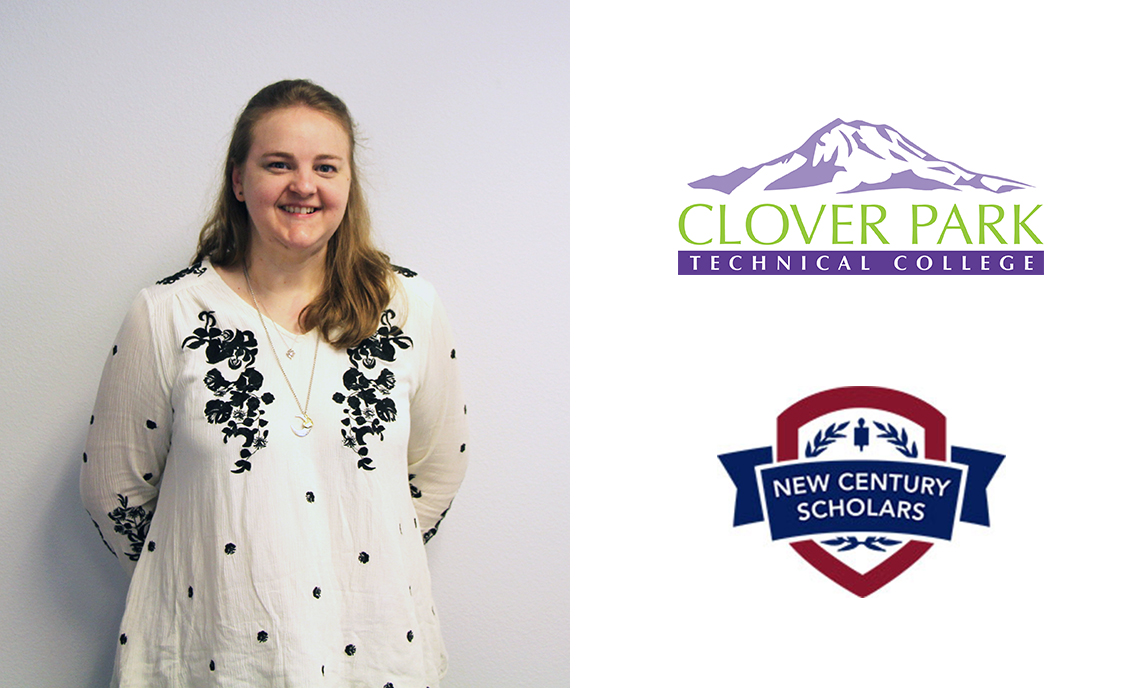 Alexandra Haley was named the 2019 New Century Workforce Pathway Scholar for the state of Washington.

Since first coming to campus at Clover Park Technical College, Alexandra Haley has been a key member of the student community in both Associated Student Government and the Dental Assistant program. Her hard work has led to several honors, and the biggest came as she completed the program last month when she was selected as a 2019 New Century Workforce Pathway Scholar.

More than 2,000 students applied for the honor, which evaluates candidates based on academic achievement, leadership, service, and significant endeavors and recognizes the highest-scoring student in the state. The program is sponsored by the Coca-Cola Foundation with additional support provided by Phi Theta Kappa and will provide Haley with a $1,250 scholarship and recognition at the Association of Community College Trustees’ 2019 Leadership Congress in October in San Francisco.

“I’m very excited, but it still hasn’t really set in that I was selected,” Haley said. “To be honest, I wasn’t expecting to win anything. I saw some of the applicants’ videos, and their stories were amazing. I’m amazed that I was chosen, because I felt like so many of the stories were so riveting. This is very humbling.”

Haley came to CPTC in spring quarter 2017 and has spent the past two years as a leading member of the campus community. She worked with ASG as the Emergency Officer and assisted with clubs and “pretty much any task on campus that ASG needed me to do.” That often included presenting to the CPTC Board of Trustees and filling any role that came up. For all her work, she was selected as the Vice President of Student Success Award recipient at the 2018 Student Awards Ceremony. From the start, she found a home at CPTC.

“I tried to visit one of the bigger campuses at the other colleges and couldn’t find my way anywhere,” Haley said. “Here it was more straightforward and had more of a family feeling. I got to know everybody quickly and really enjoyed my experience.”

Her student leadership comfort – especially the public speaking – came as the result of previous experience with creating and selling her own artwork. Drawing since she could hold a pencil, Haley grew up as the shy introvert in the back of the class always working in her sketchbook. When she decided to start selling her art, she found her introverted approach limiting her sales.

“My first year, I would hide behind my artwork, and I didn’t sell anything,” Haley said. “So we picked the most extravagant dress I had from my drawings, and my friend helped me make it. The skirt was really big, so I couldn’t fit behind my booth. It forced me out front, and it really taught me how to communicate with people and tell them about my art. A lot of people took pictures with me, and I eventually became the fairy queen at some of the events I attended.”

Everything changed when Haley’s husband suffered a stroke. He’d previously worked for Microsoft, but following his health issues they decided it was time for her to go back to school. That led her to CPTC and the dental assistant program, which appealed to her because of the consistency of the work schedule and employment opportunities.

“I can be the financial head of the household and still come back and take care of my family,” Haley said. “I can be a role model for my daughter to show that even when times are down, you can still do something to make it better.”

She spent her first year at CPTC working through prerequisites and her second year in the program.

“I started out on the lowest rung here because I hadn’t been in school for 16 years,” Haley said.

She received CPTC Foundation scholarships to assist with costs and began working with ASG. While she was no longer drawing and selling artwork, the skills she gained from that time prepared her to be a key student leader on campus.

“With the artwork, when I was dressed up I wasn’t me anymore; I was the character,” Haley said. “It helped push me out of my shell. If I hadn’t done that, I probably would not have done even half the things I did on campus. You definitely would not have found me in front of the Board of Trustees. I wouldn’t have tried to get a job on Student Council; I would’ve been the quiet student in the back of the dental assistant class.”

Haley’s own experience prompted her daughter Alexia, who is now a Running Start student at CPTC. She visited a couple classes with her mom to learn about the experience, and that was all it took.

“Every time we came here, I would just start beaming,” Alexia said. “We would get into the parking lot and I would just love it; it made me feel positive.”

Alexia began Running Start in the fall and is now starting in Computer Programming and working as a Peer Ambassador.

For Alexandra, she plans to use the scholarship money to continue her education to become a dental hygienist. That will give her a consistent career doing something she enjoys.

“I’m excited to get to work using some of my hand agility from my drawing,” Haley said. “That was my happy place, and I hope I get to find a good program to become a hygienist and use my hands regularly again.”