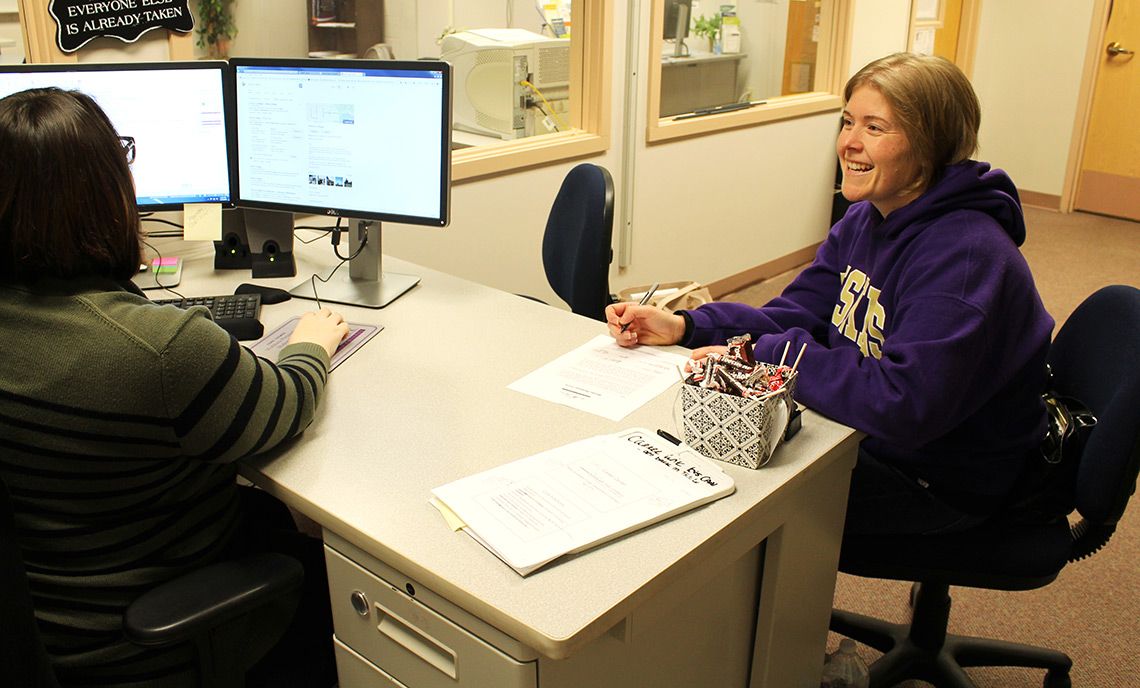 Hana Greer, right, meets with Career Development Coordinator Tiffany Windmeyer in the Career Center for assistance with an application.

After Hana Greer worked as a Certified Nursing Assistant for more than a decade, she enrolled in Clover Park Technical College’s Licensed Practical Nursing Program.

The program prepared her for the next step in her career, but after being employed at the same job for so long, Greer forgot how to be career ready.

“I didn’t realize how much I didn’t know about being ready to transition to being a professional,” Greer said. “It's a skill-set and I didn’t have that skill-set.”

Greer found the preparation and coaching she needed at CPTC’s Career Center, where she worked with Career Development Coordinator Tiffany Windmeyer to polish her resume and interview skills. Greer recommends students make their first visit to the Career Center at least six months before they complete their program.

“The skills I’ve learned at the Career Center are the ones that have gotten me the interviews and follow-ups,” Greer said.

While in the LPN Program, Greer served as the community outreach officer for the Nursing Club. To help prepare student nurses for employment after school, Greer took it upon herself to establish contact with employers who had reached out to the Nursing Program. When she received a long list of names, she enlisted the help of Windmeyer to coordinate employer information sessions during Summer Quarter of last year.

Greer continued to visit with Windmeyer up until she completed the LPN Program last quarter. In preparation for the 2016 Spring Career/Job Fair, Windmeyer advised Greer to establish a 30-second “commercial” about herself to use as an introduction. Greer quickly learned the preparation was necessary.

“I started talking to an employer and within 10 seconds there was someone else behind me,” she said.

Greer delivered resumes to every employer she met, and by the next day she was arranging interviews for LPN opportunities.

“It’s nice to feel like I’ve taken this step in my life to become a professional,” Greer said.

Greer often receives compliments from peers about how prepared she is for life after CPTC, but she’s quick to deflect the credit to Windmeyer.

“I send everyone to the Career Center,” she said.

The Career Center is located in Building 17, Room 250. For more information, visit http://www.cptc.edu/career-center.