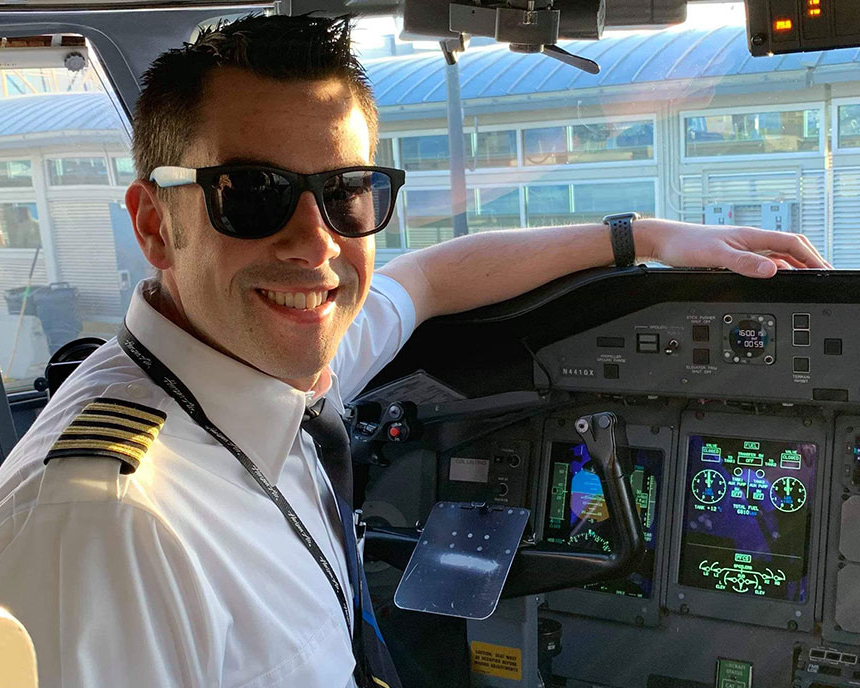 Some people spend their whole lives trying to figure out what they want to do for a career. Not Adam Carollo.

Growing up in Puyallup, Carollo was eager to get into the air. That led him from Cascade Christian High School to Running Start in Clover Park Technical College’s Professional Pilot program starting in 2005. He graduated in 2008, has flown professionally since 2011, and joined the college’s program advisory committee two years ago. For his career achievements and continued commitment to assisting CPTC, Carollo was selected as one of the college’s 2019 Alumni of Distinction Award Winners.

“It’s crazy how big of a part of my career and life Clover Park has become,” Carollo said. “I met my best friend at Clover Park; I know a lot of people in the industry because of Clover Park; I’m on the advisory committee for the program at Clover Park. It’s been great, and it continues to be great.”

Carollo’s Running Start experience included high school in the morning and ground school and flying at CPTC’s South Hill Campus in the afternoon. He began working toward his private pilot certification and finished with his commercial license 2008 after attending one year full-time following high school graduation.

“It was a way that I could fly and still go to high school at the same time,” Carollo said of Running Start. “It was the only way that I could work towards the career goals I had. CPTC was really the only show in town as far as professional pilot training. There isn’t another school around that does what Clover Park does in the professional pilot world. Even now, there isn’t another place for a local high school kid to go and train to be a pilot while still in high school.”

His first job out of the program involved air traffic control work in Auburn while he worked earned his multi-engine certification (which CPTC did not offer at the time but now does with its twin-engine Tecnam plane). In August 2011 he was hired for his first flying job with Great Lakes Airlines, where he flew 30-foot turboprop airplanes in the east Rocky Mountain region between Denver and Minneapolis.

Two years later, Carollo moved back home to take a job with Horizon Airlines. He flew 76-seat Q400 turboprops around the Pacific Northwest and became the base chief pilot for the Horizon pilot base in Medford, Oregon. He also worked as an instructor and check pilot doing evaluations, check rides, ratings, and certifications.

A little more than five years with Horizon gave way to a jump to Alaska Airlines this past January. Carollo is based out of San Francisco, but he commutes from his Puget Sound home. He flies all over, typically working a four-days-on, three-days-off, schedule, and he finds out where he’s flying each month during the final week of the previous month.

Carollo turned 31 earlier this year and has achieved the job of his dreams. He plans to stay with Alaska until he retires.

“It really is incredible, and I’ve been very lucky and very fortunate to get hired with Alaska Air Group, working for Horizon for six years, and now at Alaska,” Carollo said. “To be where I’m at already and have more than 30 years to go in my career is really incredible.”

In his spare time, Carollo enjoys mountain biking, hiking, and kayaking. And, of course, traveling. He also visits CPTC regularly and shares his experiences with students.

“It’s just so amazing that, from being a junior in high school at Clover Park in a little Cessna, this is where it ended up,” Carollo said. “Clover Park is still one of the best options in our region for a student in high school – or any age – who wants to go do this.”

Beyond even the pilot program itself, Carollo speaks highly of CPTC and the opportunities Running Start provides for young students.

“If you’re considering it or have this inkling that Running Start may be for you, most likely it is. It really is full of benefits in terms of financial benefits – free education – and getting started toward your career at a young age and meeting people at a higher level of education who can help guide you toward career options that interest you. It’s definitely worth the time and effort to look into and pursue.”