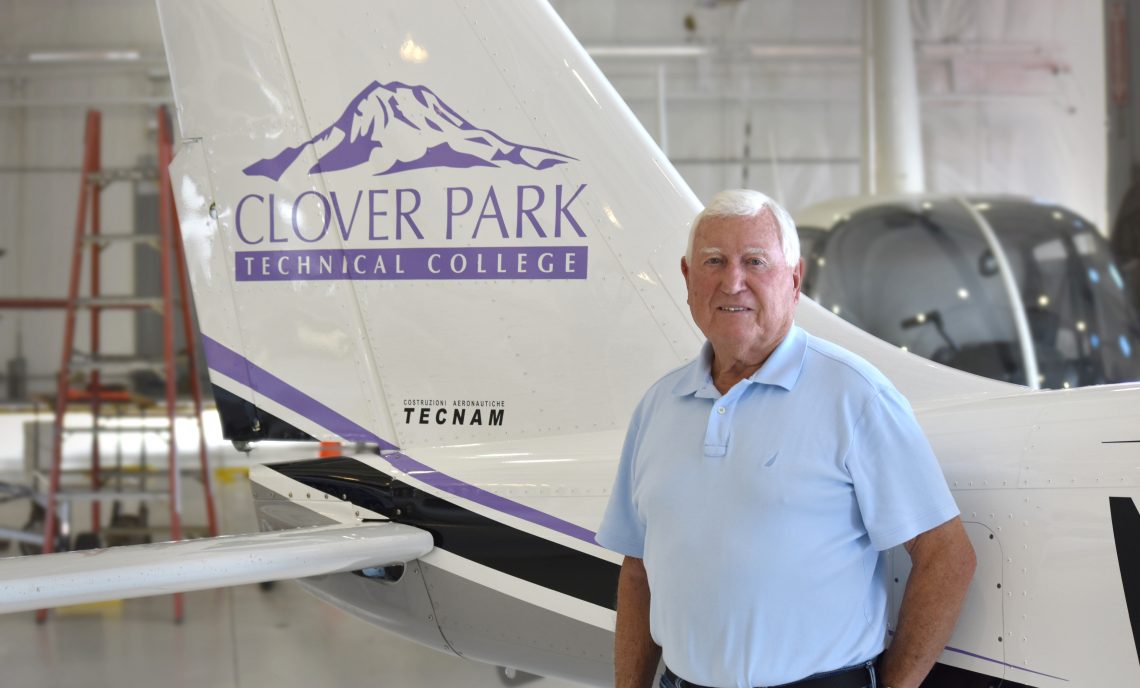 John Schell smiles in front of a Cessna plane that is proudly adorned with CPTC ‘s logo.

John Schell has been a longtime fixture at Clover Park Technical College. Even to this day, he is a regular visitor to the South Hill campus, where he watches the planes take off and land on the tarmac. Schell spent his early years as a pilot and mechanic rooted at Clover Park.  When he was in tenth grade, Schell already owned and flew his own plane. It was his hope of obtaining his own aviation maintenance license that drew him to the program at Clover Park. In 1954 he graduated with an airframe and power plant license, and from there he continuously dedicated his life to his passion to aviation.

Schell found himself in different parts of the country but always remained imbedded in his industry of aviation. Shortly after completing his education at Clover Park, Schell became an active duty member in the Air Force maintaining the B-36’s, a type of military plane that at the time of its use, was known as the “Peacemaker.” However, after his four years of service, the B-36 was decommissioned and all staff working with the planes were let go. Looking at his options, he found himself drawn back to Clover Park. Only this time, his role was that of an instructor instead of a student. He dove into his teaching career in 1958.

“A lot has changed since then. Back when I was an instructor, the aviation classes were taught on the Lakewood campus.”  Schell reminisced, “We had our own tarmac, which I believe you can still see some of it today. It was a great location and it had a lot of history, what with many of the same hangers having been used for different purposes during the war.”

Although his time spent as an instructor ended in 1962, John Schell continues to think back of his time at Clover Park fondly. When speaking of his previous students, he likes to mention how each of them left an impression, especially one student in particular, James Hancock whom he continued to run into throughout his own piloting career in later years.

“There is always somebody who stands out in a class and that was James Hancock. He was a very good student” Schell continues on, “He was a natural, you tell him what to do and how to do it, and he had it picked up before too long.”

Even after his time at Clover Park ended and he was employed with Northwest Airlines, he still remained in contact with Hancock and followed his career. Though they were not employed together, they considered one another colleagues and often talked shop with one another.

“We were both pilots and ran into each other from time to time. Though I remained in Washington and he was based through Minneapolis.” Says Schell. He remembers a time where he even got to fly with his once student.

“I was on a flight from Saint Louis to Frankfurt and was in need of a co-pilot because my usual one was sick. The next day, James Hancock showed up and flew with me as my co-pilot. We ended up flying five days together.”

Though that was the last time they flew together, that wasn’t the only time their paths met.

“Later in my career, I wanted to be type rated to fly the 747-400 and Hancock ended up being the chief pilot for the whole program. He became my instructor and signed my license.” The irony is not lost on Schell who continued in saying, “It all came full circle. To have one of my ninth-grade students grow up and later become an instructor and to have him license me to fly the biggest plane at the time, was one of the nicest awards I could have gotten.”

Schell has remained close with Hancock and still speak to one another to this day.

“Sometimes when you are teaching, you aren’t sure if you are getting through to your students, but he showed me that we do make a lasting impression. He graduated and became quite successful in the industry.” Says Schell.

Schell retired from Northwest Airlines in 1992, and now spends his time restoring old planes with his sons. He has left a legacy and shares his knowledge with his community and family, many of which have followed in his footsteps and are now working in aviation themselves. Though his time as an instructor ended many years ago, Schell is still a presence at the South Hill campus, where he can be seen from time to time, enjoying the views of the planes. 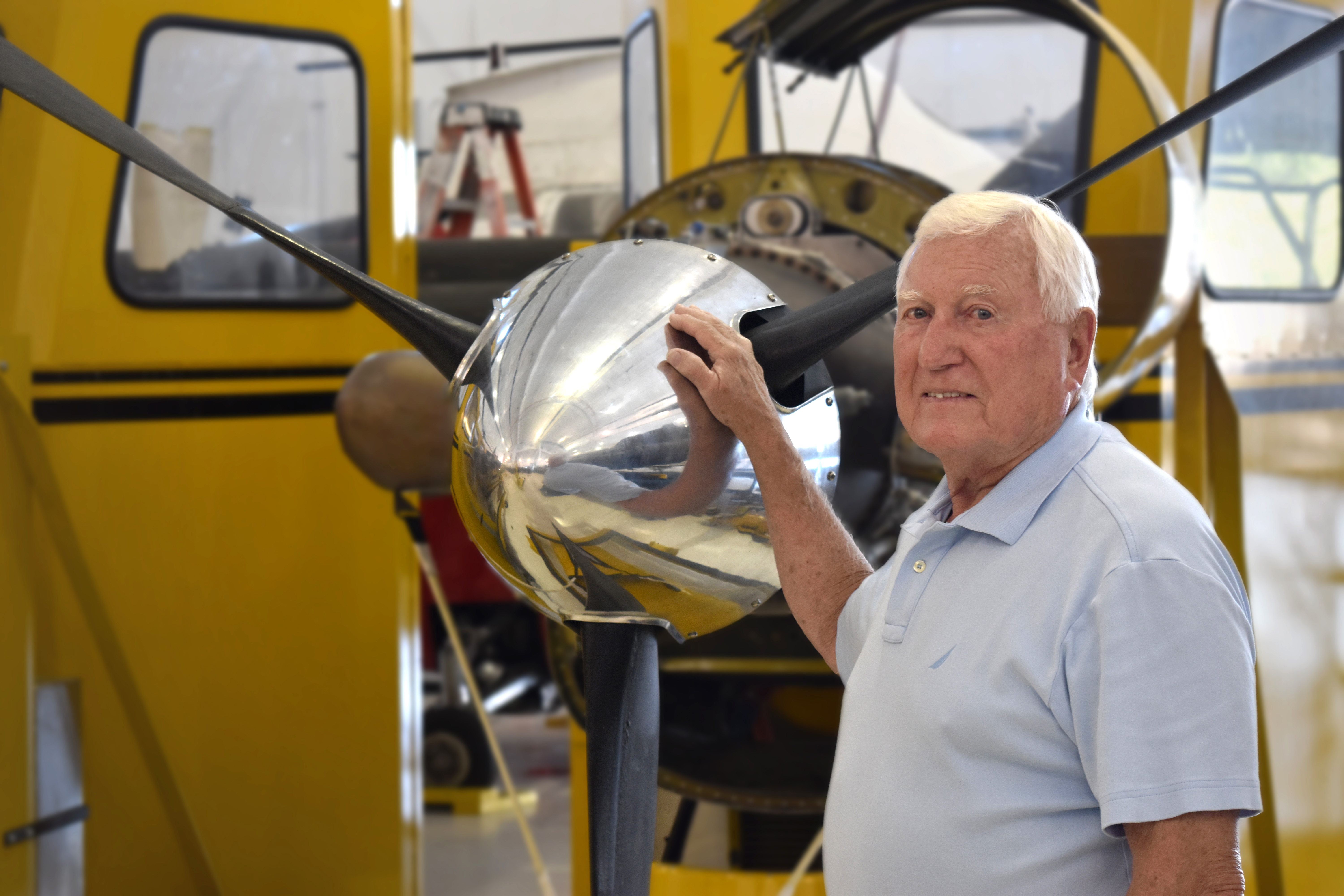 John Schell smiles in front of a propeller engine, which is used to teach current Aviation Maintenance students at CPTC. 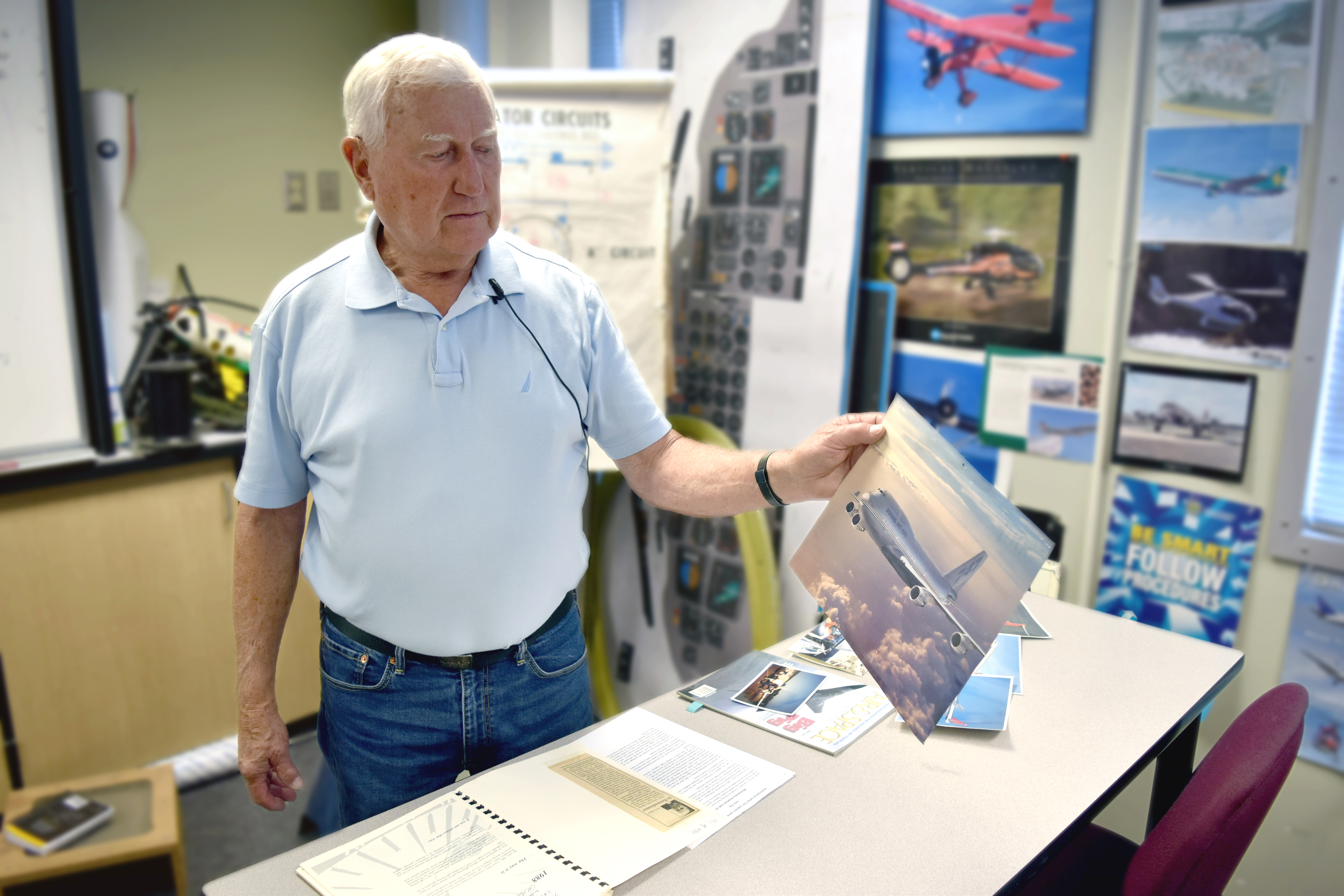 John Schell holds a picture of a 747-400, similar to the one that James Hancock type rated him for.