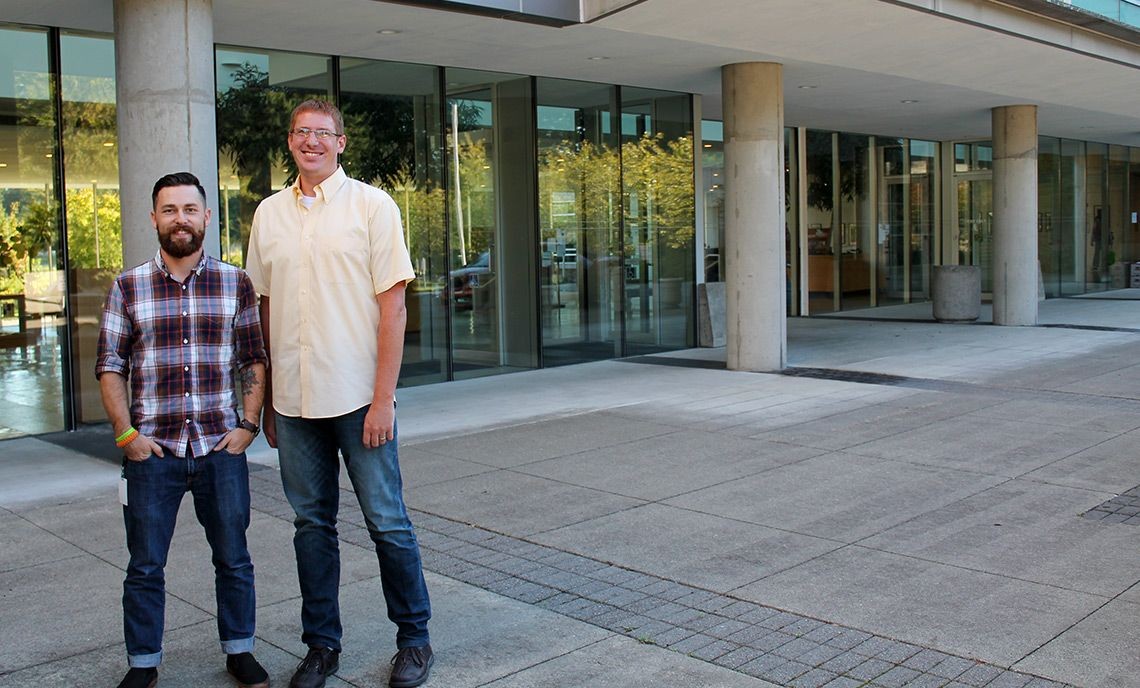 CPTC graduates Noah Hebert, left, and Michael Engstrom were both hired as application developers with the Washington State Department of Ecology.

When Noah Hebert and Michael Engstrom graduated from their respective universities, they were confident about their prospects entering the work force.

But Hebert, who majored in communication, and Engstrom, who studied elementary education, learned that getting started in their careers would prove a challenge.

Hebert got his foot in the door in advertising with an internship in Seattle – and then the recession hit.

“I went to a private small school and it was ingrained into our heads that you’re going to have an excellent education and the second you get out of here, you’ll get on your feet,” Engstrom said. “No, not at all.”

Two years ago Hebert and Engstrom enrolled in Clover Park Technical College’s Computer Programming and Web Development to prepare for their second career. They completed the program in March, and soon after both were employed as application developers for the Washington State Department of Ecology.

“I thought this was the perfect position for me because it’s computers, outdoors, and saving the world all at the same time,” Hebert said.

Hebert and Engstrom use skills learned at CPTC to write code. Engstrom works with the water quality division, and Hebert works with hazardous waste and toxics reduction. They are both “Level III-in-Training” employees, which means they started out as Level I and are following a two-year plan of classes and in-house trainings to advance.

“It’s all laid out and I have a plan of where I’m going,” Engstrom said.

Hebert credits the later quarters of the CPTC program, especially the independent learning, with preparing them for their new positions. It didn’t take long for them to see how their lab work was training them for real work.

“We had basic training with the class but then we had labs in between that gave us the opportunity to expand on what we learned,” Hebert said. “I got out here, and it was actually how things were done.”

Before he was hired with the state, Engstrom interned with Symetra in Bellevue after an IT director there heard him speak at an end-of-quarter presentation hosted by the college. Once Engstrom completed the program, it took him just two weeks to find full-time employment in his new specialty.

“The main test after I was done was how can I get a job? Do I get a job?” Engstrom said. “It was perfect.”